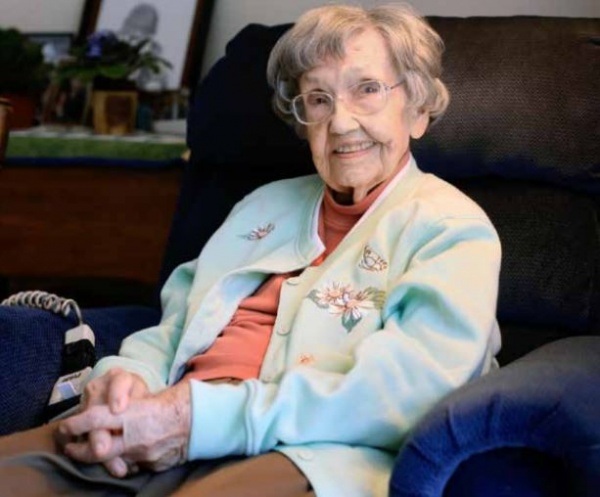 Ellen Tufts, oldest resident at our Meetinghouse Village community in Maine is, at age 104

The Boston Cane custom dates back to 1909, when the publisher of the now defunct Boston Post, distributed 700 gold-tipped canes to towns in New England, requesting that the town governments bestow the cane to the oldest living male. The rule was changed to oldest “living resident” in 1930. The recipient no longer keeps the cane; instead it is kept at the local Town Hall and presented in a glass case at a ceremony along with a signed proclamation from the Town Council.

Known for her gentle and gracious demeanor, town officials and Meetinghouse guests were gratified to see Ellen recognized this way. True to her reputation as a baker, she honored the ceremony attendees with brownies she made that morning.

At the event, Ellen shared varied memories of her early days in Gray, Maine, where her family was the first to own a Model T Ford. She spent most of her career as a teacher and school principal until her retirement in 1974.

Always one to deflect attention from herself, when asked about her secret to a long life, Ellen replied, “I am just blessed.”

“ They hug me frequently. Those hugs restore life to my soul. That other nursing home in Connecticut was fine but the care here is hundreds of times better. ”